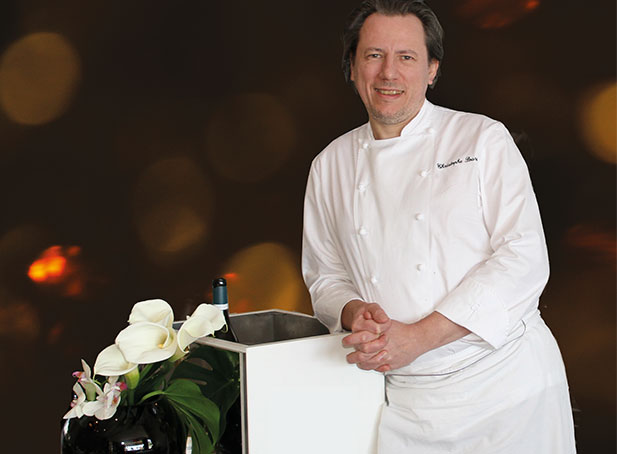 A native of Cherbourg, Christophe Poard had masters of the highest names in French cuisine. This chef, with his flawless culinary know-how, is a confirmed talent. Indeed, Christophe Poard has forged his philosophy of the trade and his high-level expertise in excellent starred houses such as: Taillevent, La Vieille Fontaine at Maisons-Laffitte with François Clerc, Jamin-Paris with Joël Robuchon or at the Grand Véfour in Paris with Guy Martin.

Thereafter, he will take over the management of the kitchens of the restaurant la Truffière in Paris in 2016, before joining those of Park 45 in Cannes at the Grand Hôtel on the Croisette in 2018. And finally in December 2019, he accepted the position of executive chef at the superb Château de Dissay , 5* hotel, near Poitiers.

Crowned with numerous distinctions both in France and Belgium, he obtains 17/20 in GaultMillau. He was even elected Chef of the Year in 2004 in Belgium. Coming from a family of restaurateurs and hoteliers, Christophe Poard was brought up in the seraglio of cuisine and the art of hospitality. For his great professionalism, he was given the European Hotel & Restaurant Award – Honor Award in 2019.

Thus, at the Grand Hotel Kempinski Geneva, during the European Hotel & Restaurant Award 2019 ceremony, in partnership with Champagne Collet, with Mr Guillaume Gomez as permanent Honorary President – President of the association of cooks of the French Republic, he was distinguished by a “Career trophy” rewarding his great contribution to the service of gastronomy. During this prestigious evening which took place in the VIP lounges of the Grand Hotel Kempinski Geneva, in March 2019, other big names were rewarded such as Jacques Chibois (for his contribution to the influence of gastronomy French) and Marc Veyrat (for his hotel in the mountains) or François Delahaye, Chief Operating Officer of Dorchester Collection (European Hotel Award Chief Operating Officer of the Year 2019 trophy) among other

The European Hotel & Restaurant Awards by References are awarded to women and men who, through their human qualities, passion for their profession and the excellence of their work, contribute to highlighting the high quality of European hospitality and gastronomy.